You are here: Home / Environment / Conservation / A "green" holiday 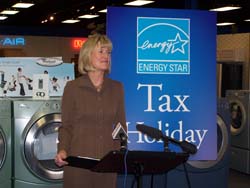 Consumers could soon have a holiday for buying “green” appliances.

Lt. Governor Barbara Lawton wants to create a sales tax holiday for Energy Star certified appliances, where no sales tax would be collected on appliance purchases of up to $1,500. Lawton is backing a bill being introduced in the Legislature that would create a one-week holiday around Earth Day each year.

Lawton says the use of such appliances and energy-saving light bulbs would prevent millions of pounds of pollution from being released into the atmosphere and drastically reduce energy bills.

The financial cost for the state is not known yet, but Lawton says a similar holiday in Virginia had only a small impact. She says a holiday on Virginia's 5.5 percent tax cost the state about $166,000 in sales taxes, but also helped generate $3.3 million in economic activity.

Lawton hopes the bill can be approved this session.