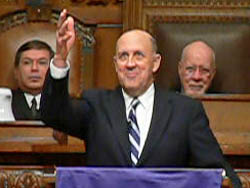 Senate Republican Leader Scott Fitzgerald (R-Juneau) says Governor Jim Doyle offered many ideas on how to spend more taxpayer dollars, but offered no ideas on dealing with the state's fiscal mess and the threat of a recession.

"The economy is going south in Wisconsin. We're gonna need a budget repair bill soon. We know that we're looking at some pretty terrible numbers coming out of the holiday season and the governor didn't address it. I mean he just kind of ducked that whole issue."

The governor talked about the importance of investing in education and research. Madison Democrat Spencer Black agrees those two things are essential to a growing economy and high-paying jobs, but when the governor says we need to make sacrifices and tough choices; Black says he hopes that doesn't mean the average person has to take it on the chin.