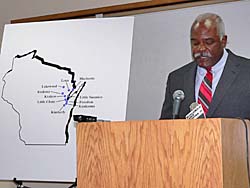 More taxpayers are learning of a potential security breach. About 5,000 taxpayers are finding out that their personal information could be compromised, after their social security numbers were fully visible through the envelop window on some 1099-G tax forms sent to taxpayers in Northeastern Wisconsin.

"I want to take this opportunity to make a full apology for this error and apologize to those taxpayers who may have been effected by this mistake."

Department of Administration Secretary Michael Morgan says his agency and the Department of Revenue are taking actions to fix the error, notifying the affected taxpayers, and taking preventive measures so it doesn't happen again.

"The two agencies moved quickly to correct the problem, which was a mail machine malfunction which incorrectly folded a limited number of the forms."

People effected are being offered one year of free credit monitoring by the state, at a cost of 25 bucks per person. This is the third time in just over a year that social security numbers were visible on the envelops.