You are here: Home / Education / Rally for virtual schools 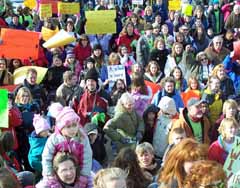 Legislation on virtual schools draws hundreds to the Capitol. Parents and students from Wisconsin's virtual charter schools rallied in support of legislation from state Representative Brett Davis. The state Court of Appeals ruled last month that the Wisconsin Virtual Academy was in violation of open enrollment, charter school and teaching licensure laws.

Davis says his bill will resolve those issues, and he disagrees with virtual school opponents who claim the schools are in competition with bricks and mortar schools. A competing bill being offered in the state Senate is not supported by the virtual school families. Davis says that bill cuts funding for virtual schools in half. Davis says he's ready to work with the governor's office to reach a compromise.