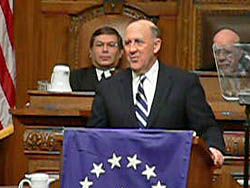 The Speaker of the state Assembly says he looks forward to focusing on the priorities laid out in the Governor's State of the State Address.

Assembly Speaker Mike Huebsch ( pronounce ) (R-West Salem) says the Governor is moving in the right direction by trying to boost the economy. He says the Governor outlined several ideas Republicans should be able to support, such as providing tax credits, reforming the system for capital gains, and providing incentives for new companies.

Huebsch says the Governor's BadgerChoice healthcare initiative may be a good opportunity for lowering costs. However, he wants to see more details of the plan first. The Speaker says Republicans prefer a plan that focuses more on giving the public control of how their health care dollars are spent.

The Speaker was less enthusiastic about the Governor's push to increase Wisconsin's minimum wage. Huebsch believes the majority of businesses are paying much more than that level. He believes cutting taxes on wages will do more to help boost the economy.

Huebsch also questioned if the Governor's push for a statewide smoking ban will happen this year. He says the proposal still has a long way to go and not much time to get there before the end of this session.