You are here: Home / Politics / Govt / State of the State: a warning, and some promises 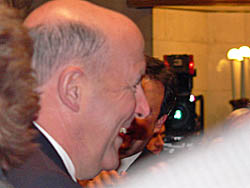 Governor Jim Doyle warns of hard times, and promises help on energy and health care. Doyle used his State of the State address to warn that Wisconsin, like the nation, "faces a very difficult fiscal situation." But Doyle also pledged to continue to work to grow Wisconsin's economy by encouraging new research and development and investment, including this ambitious prospect — investing $150 million over the next decade in a Wisconsin Energy Independence Fund, to position the state as "the Saudi Arabia of renewable energy." Doyle promised to invest $95 million in energy efficiency, but gave no details.

His other major pledge of the night: making health care more affordable. To do that, Doyle proposes BadgerChoice, a one stop shop for small businesses, providing competition among insurers and choice for consumers. Doyle also made expected pitches for increasing the minimum wage, passing a statewide smoking ban, requiring insurance companies to cover kids with autism, and approving the Great Lakes Compact. And Doyle, whose wife Jessica was a teacher, promised to address the issue of teacher pay in his next state budget.