You are here: Home / Military / Veterans lose a friend in Dreyfus 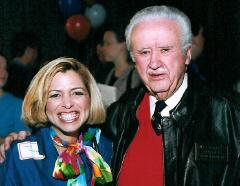 "He was a great veterans supporter and a tremendous statesman for our state and a veterans' advocate."

He had recently been a guest speaker at the annual veterans' gala at the Wisconsin Veterans Museum. Scocos notes Dreyfus made use of the Federal GI bill, earning a bachelor's and a master's degree at UW-Madison after serving in World War II. Scocos says he's a great example of what a good education can do for Wisconsin veterans.

"And he's a perfect model of why we should continue the Wisconsin GI bill because giving those folks the appropriate opportunities for education, allowing them to stay in Wisconsin, grow jobs in Wisconsin, and be productive citizens."

The man known for his trademark red vest also served on the UW System Board of Regents, chancellor of UW-Stevens Point, interim state school superintendent, General Manager of Wisconsin Public TV, and a Sentry Insurance exec, among other things. Dreyfus died Wednesday night at his Waukesha home while watching TV. He was 81.