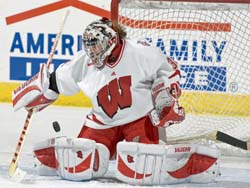 After allowing just three goals during a weekend sweep of Ohio State last weekend, University of Wisconsin junior goalie Jessie Vetter has been named the WCHA Defensive Player of the Week.

Vetter (Cottage Grove, WI) stopped 25 of 27 shots she faced during a 3-2 win over Ohio State last Friday, then made 20 saves to help UW complete its third straight WCHA series sweep with a 4-1 triumph on Saturday.

On the season, Vetter has 15-6-1 record between the pipes for the UW and ranks second in the WCHA overall in goals-against average (1.32) and fourth in save percentage (.923).

Vetter and the Badgers have won six straight games and are now just one point behind Minnesota for second place in the WCHA.