You are here: Home / Health / Medicine / A push for mental health parity 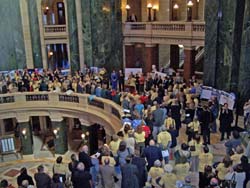 A crowd of over several hundred supporters of mental health parity turned out for a rally Wednesday afternoon at the Capitol. They're pushing for legislation that would require insurance companies to cover mental illness the same way they treat physical problems.

Without coverage, Lt. Governor Barbara Lawton says many people go without treatment for illnesses as common as depression. With that disease alone, she says thousands of work days are lost each year. Lawton says not having access to treatment hurts the state's economy.

Opponents argue such a mandate would increase health insurance costs for Wisconsin residents. Lawton says other states have enacted parity legislation without any major consequences. Minnesota enacted party 12 years ago, with an annual cost increase of about three dollars a person. In other states, Lawton says some people are even saving money.