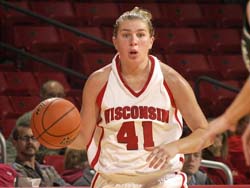 Anderson also collected 10 rebounds in the win, for her 25th career double-double.

The Badgers have just three games left in the Big Ten regular season.