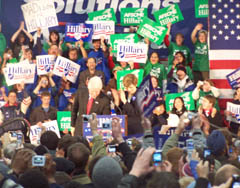 The Bill Clinton road show rolled into Madison Thursday, and at times it was a bit hard to tell who he was campaigning for. Several times during his speech at the UW Livestock Pavilion, Clinton referred to what “we” are going to, although he was in town to campaign for his wife, Hillary Clinton.

“We are going to take the politics out of science, and stop rewriting reports on stem cell research, on human genome research, on global warming research,” said Clinton. He also promised that a Hillary Clinton presidency would clean up domestic politics. “The special interests have too much power,” Clinton said. “If you elect her, she will ask you to join her in saying 'no more cronyism, only competent people get important jobs like FEMA.' ”

On foreign policy, Clinton said “America is back” would be his wife's message to the world. “That means we are going to cooperate with you whenever we can, and act alone only when we have to, not the other way around,” he said. “Military force would be used only as an absolute last resort.” He also said Hillary Clinton will end the war in Iraq, and use some of the annual $120 billion cost of the conflict to provide care for the nation's veterans.

Clinton said his wife's campaign has been able to raise $13 million over the Internet since the Super Tuesday primaries, and he urged Wisconsin voters to join in that financial support. “What you need right now, after the last seven years and with all the clouds on the horizon, is the best president,” Clinton said. “And I think you know who it is.”

Clinton's speech in Madison lasted an hour — on a day when he also spoke in Milwaukee, Waukesha and La Crosse.