You are here: Home / Politics / Govt / Campaigning for mom 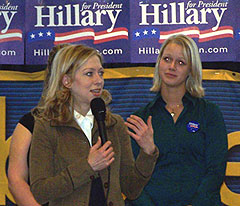 A crowd of over 500 students packed a room at the UW-Madison Memorial Union Monday to hear from the former first daughter. Chelsea Clinton spent over an hour answering student questions about her mom's campaign. She told those attending that it's important for everyone to be informed.

Clinton discussed Hillary's proposals on topics ranging from No Child Left Behind to ending the war in Iraq. When questioned about the absence of nuclear power for Clinton's energy policy, Chelsea responded that her mom doesn't want to include it in the future until the waste can be disposed of safely.

One audience member was critical of Chelsea for making phone calls to super delegates. Clinton defended the practice, saying she'll talk to anyone she can.

Chelsea Clinton was in Madison and Milwaukee on Monday, with stops planned in Eau Claire and La Crosse on Tuesday. Hillary is due in Milwaukee on Saturday, and Chelsea said a Madison appearance is in the works as well.