You are here: Home / News / Coughlin is the real Giants MVP 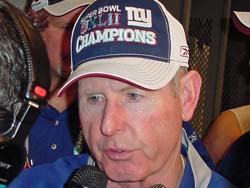 Eli Manning was named the Super Bowl MVP.  Perhaps pass rushing phenoms Justin Tuck or Osi Umenyiora should have been given more consideration.  But the real reason why the Giants won the Super Bowl is because of their head coach, Tom Coughlin (pictured).

For years, Coughlin has rubbed his players the wrong way with his drill sargeant type approach.  His boot camp type approach to life in the NFL was growing thin on his players.

But somewhere along the way, the lightbulb went on and Coughlin realized that he wasn't getting what he needed out of his players.  He knew the only way to change things would be to change himself.

Coughlin formed a players committee, listened to his players to find out what their issues are and made some adjustments.  Give Coughlin credit.  Without any changes, the Giants would have spiraled into another miserable season and the coach would probably be unemployed right now.

Instead, Coughlin and the Giants are Super Bowl champs.  It took them awhile to develope into the team that won the Super Bowl.  In fact, they really didn't put it totally together until the end of the regular season, but once the Giants reached that point, they were playing like the best team in the NFL.

By changing his ways, Tom Coughlin gave his team an opportunity to bond instead of rebel.

Eli Manning came around and performed well down the stretch.  The defense has been rock solid down the stretch as well.  But without Tom Coughlin's change in attitude, the Giants would have had no chance at all.