You are here: Home / Crime / Courts / Death of deputy was a suicide 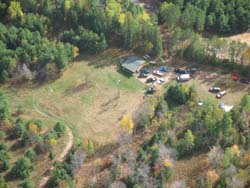 A Department of Justice investigation shows Forest County Sheriff's Deputy Tyler Peterson committed suicide, the morning after he fatally shot six people and wounded another in a Crandon apartment.

Division of Criminal Investigations Special agent Brad Kust says Peterson was shot once in the arm by a police sniper, then shot himself three times in the head. The first two shots went through his chin, but the third to the side of the head was the fatal shot.

Attorney General J.B. Van Hollen says investigators have determined Peterson had no accomplices and no help eluding police after the shootings. Van Hollen says prosecutors have also decided no charges will be filed against anyone who interacted with Peterson between the killing spree and his death.

DCI acting administrator Mike Myszewski says the investigation also shows nobody knew what Peterson was planning. Officials say Peterson had contact with 14 people prior to the shooting, none of which felt there was any indication that he was planning an act of violence.

DOJ held a briefing on their investigation Thursday at the Capitol.