You are here: Home / Fires/Accidents/Disasters / Doyle apologizes for freeway fiasco 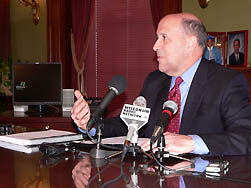 The governor says there are lessons to be learned after the mistakes made during the snowy Interstate fiasco.

Governor Jim Doyle responds to a new report documenting the inadequate response, during the blizzard which trapped more than 2,000 vehicles on the Interstate near Madison on February 6th.

The governor apologizes to stranded motorists for their inconvenience.

"We should just be very, very thankful that we're not dealing with a much worse situation than what we have. What we have are people that were terribly inconvenienced and went through a very, very bad night, and I apologize to those people."

"It's clear that the State Patrol leadership that afternoon was slow and ineffective at recognizing that the situation had turned from a traffic problem out on the Interstate to a public safety crisis involving thousands of stranded motorists."

Despite efforts by hard-working people, Doyle says there were some significant mistakes and failures made at the higher levels. He says the vast amount of incoming information simply was not being reviewed adequately, adding to the disaster.

"The number of 9-1-1 calls that are documented, calls that were coming in from state troopers themselves … news reports and news reporters who were there."

Doyle says the DOT needs to look at its road closure policy, coordination between agencies must improve, and there needs to be a better way to notify motorists of potential problems.