You are here: Home / Politics / Govt / Firing up the party faithful 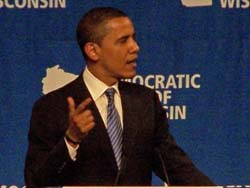 Democratic presidential hopeful Barack Obama says Americans are tired of special interests controlling Washington, and the Democratic nominee needs to be able to make real changes. He told those attending the Democratic Party's Founders Day Gala in Milwaukee Saturday night that “the stakes are too high” and the party can't afford to play the same game. The U.S. Senator from Illinois says this election is about writing a new chapter.

Obama also addressed critics who say he won't be able to stand up against the Republican nominee. Jokingly, Obama referred to living on the south side of Chicago, saying “I'm skinny, but I'm tough.” Obama says he looks forward to debating GOP front runner John McCain, and criticized him for continuing to support the policies of President Bush.