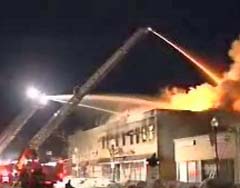 A three alarm fire destroyed a Kenosha restaurant Thursday morning. The blaze at Victoria's Nautical Inn was reported about 2:30 a.m.

Battalion Chief Matt Haerter says crews had to combat below zero temperatures as well as flames. “Temperatures were at minus two degrees when the call began,” Haerter noted, adding that some equipment froze and failed in the extreme conditions. He added that the first crews on the scene were only able to spend about five minutes inside the three story brick building before being driven back by extreme heat. That leads firefighters to believe the blaze had been burning for some time before being reported.

Firefighters from Kenosha and several other communities battled the fire. Some two dozen residents of nearby apartments were evacuated until the blaze was brought under control.