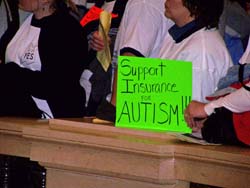 The Governor is calling on the state Assembly to pass a bill requiring insurance companies to cover autism treatments.

The state Senate already approved the measure, but Assembly action has not yet been scheduled. Governor Jim Doyle is urging them to take it up before the session ends. Doyle says the Assembly can still do the right thing in approving the bill, which will provide relief to thousands of Wisconsin families.

Doyle spoke to several hundred supporters of the legislation during a rally at the Capitol Thursday. He says lawmakers should side with families in need of help, not insurance companies.

Opponents argue the mandate would be too expensive, and the state should focus on fixing a waiver program that helps families pay for treatments. Doyle says the public dollars aren't enough to cover the needs of families trying to obtain treatment for autistic children.

An estimated one in every 150 children suffers from autism.