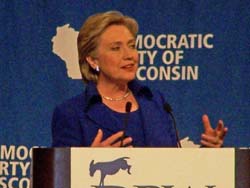 The US Senator from New York spoke to a crowd of several thousand Saturday night at a Democratic Party dinner in Milwaukee. Clinton says the nation is ready for a change after two terms of President Bush, and she wants to put the country back on the right track.

Clinton's speech touched on a number of her campaign issues, including the creation of a universal health care system, ending the war in Iraq, and the failures of No Child Left Behind. She wants to end what she calls an “unfunded mandate” that has failed kids and teachers.

The former First Lady took the stage just before her primary opponent, Senator Barack Obama. Clinton says both candidates can make history, but she will be the tough leader America needs.

Clinton plans to campaign in the state through Monday, ahead of Tuesday's primary election.