You are here: Home / Politics / Govt / Huckabee campaigns in Madison 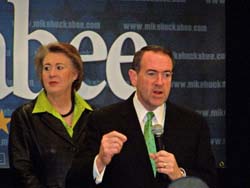 Republican Presidential candidate Mike Huckabee told supporters in downtown Madison Thursday that's it's not over till it's over.

The former Arkansas Governor called on the crowd of about 200 to prove the pundits wrong, by going out on the February 19th primary and helping him win Wisconsin.

Huckabee says Wisconsin voters can send a message by getting their friends and relatives to go out and vote for him. He says they shouldn't be willing to just say “game over” when it comes to the Republican nomination. Huckabee says it's also about staying true to conservative believes, and making sure they are heard during the campaign.

Huckabee currently trails Senator John McCain in the race for the GOP nomination.