You are here: Home / Politics / Govt / Huckabee wants voters to have a choice 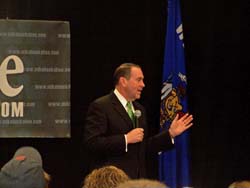 Republican presidential hopeful Mike Huckabee shows no signs of giving up on his campaign.

The former Arkansas Governor is trailing front-runner John McCain, but has no plans to leave the race. Meeting with reporters after a rally in Madison Thursday, Huckabee said it would be a great disservice to the country and the party to just give up and quit because the numbers are trending towards McCain at this point.

Huckabee says no candidate has the delegates needed to claim the Republican nomination, and giving up before the race is decided is just the mark of a quitter.

Huckabee says "you can beat me, but you can't make me quit."

By staying in the race, Huckabee hopes to give Wisconsin voters a choice in Tuesday's primary election. He says they don't have that choice if everybody leaves the field, turning the nomination process into a coronation.

Huckabee spoke in Madison Thursday to a crowd of about 200 supporters.