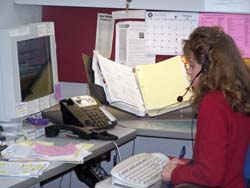 Violations of the state's No Call list were the number one complaint received last year by the Department of Ag, Trade, and Consumer Protection.

Consumer Protection officials handled over 3,000 complaints in 2007 related to possible violations of the state's No Call list for telemarketers. DATCP Secretary Rod Nilsestuen says the list is among the most popular of the programs handled by the agency, and the high number of complaints reflects how seriously people take signing up to be on it.

The issue is number one on the agency's annual top ten list of the most common consumer complaints. Other top calls included landlord-tenant disputes, home improvement scams, and telephone billing errors.

State Consumer Protection administrator Janet Jenkins says complaints about cable TV providers were new on the list this year, with many of them the result of the dispute between cable providers and the Big Ten Network. Jenkins says there's little they can do about those complaints, since companies weren't breaking the law.

Other entries on the list include business opportunity offers, sweepstakes scams, problems with online retailers, and troubles with credit card companies.

The state's Consumer Protection office took in nearly 15,000 complaints from the public in 2007. Issues dealing with the state's No Call law have topped the list for the past five years.