You are here: Home / Politics / Govt / Obama in Badgerland 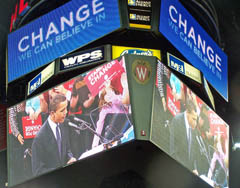 We’re on our way. That was Barack Obama’s message to Wisconsin in Madison Tuesday night. Fresh off his “Potomac Primary” wins in D.C., Maryland and Virginia, Obama rolled into Madison’s Kohl Center proclaiming “a new American majority.”

“We’re bringing Democrats, Independents, Republicans, blacks and whites, Latinos and Asians and Native Americans, small states and big states, Red states and Blue states, all into the United States of America,” Obama told the Kohl Center crowd, which a campaign source put at 20,000. The Democratic Senator from Illinois drew thunderous applause as he denounced the war in Iraq and “Bush-McCain Republicans.” Obama also decried Washington games and lobbyists, and called for uniting the nation behind a common purpose: restoring hope to America, which includes fighting for American jobs, rebuilding the nation’s schools and assuring secure retirements for citizens.

Obama made a point of mentioning Wisconsin’s history: “where better to affirm our ideals than here in Wisconsin, where a century ago the Progressive movement was born?” Wisconsin’s presidential primary is next Tuesday, and Obama, Hillary Clinton, John McCain and Mike Huckabee are all planning campaign stops here.