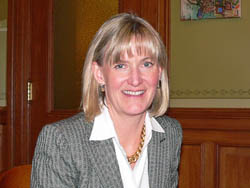 A tax holiday on purchases of energy-efficient appliances is getting a little closer to reality.

The bill, authored by Lt. Governor Barbara Lawton , would designate one week each year for people to buy any Energy Star-certified product without paying sales tax. Although the measure would save consumers money on purchases and utility bills, it means there's a whole lot of sales tax not being generated for the state government.

Also, Lawton says, the Energy Star appliances are good for the environment. The Lt. Gov testified at a couple of hearings at the state capitol (Thursday) on the legislation sponsored by Senator Mark Miller (D-Monona) (SB-421) and Representative Pat Strachota (R-West Bend) (AB-725). She went to the hearings with the support of 70 percent of the state senators and a quarter of Assembly members.

"Broad bipartisan support. Editorials across the state saying 'This is a great idea for Wisconsin.'"

Residential consumers would be able to buy Energy Star refrigerators, dishwashers, clothes washer and dryer, and light bulbs priced at 15-hundred bucks or less during the seven-day period leading up to Earth Day.

According to the Wisconsin Energy Conservation Corporation, if just 1,000 Wisconsin homes switched to an Energy Star refrigerator, dish and clothes washers and changed 25 light bulbs over to compact fluorescent light, they would: