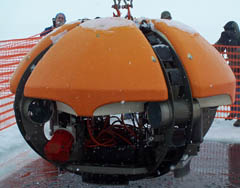 Lake Mendota stands in for Antarctica and beyond, as an underwater robot dives into the Madison lake. ENDURANCE — the Environmentally Non-Disturbing Under-Ice Robotic Antarctic Explorer — takes a series of test dives in the lake this week, with the types of conditions it will face when it deploys in October to a perpetually ice-covered lake in Antarctica. “We want to put it through its paces here, before we send it all the way to Antarctica,” says Peter Doran, the University of Illinois-Chicago scientist in charge of the project. Doran says Madison's big lake is the perfect test track. “I'm glad that we came into one of your worst winters,” he says.

ENDURANCE will be making test dives under the ice of Lake Mendota through Friday. In addition to the Antarctic exploration, the six million dollar robot submersible is a prototype for a probe NASA hopes to send to the frozen oceans of Europa, one of the moons of Jupiter. “We're learning how to explore under the ice of worlds we've just become aware of,” says John Rummel, head of NASA's astrobiology program.