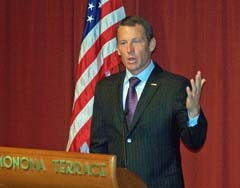 Lance Armstrong says failing to pass a statewide smoking ban in Wisconsin would be a moral failure. The cancer survivor and seven time Tour de France champion says banning smoking in public places is something society can do, to decrease the incidence of cancer. “These are things that we know work, but we're not doing them,” Armstrong told a rally, attended by about a thousand people, at Madison's Monona Terrace. “If you don't do that, then you're failing morally, and its not acceptable in Wisconsin and it's not acceptable in America.”

With polls showing majority support for a smoking ban in Wisconsin, Armstrong says it's time for leaders in the legislature to allow a vote: “they should certainly not stand in the way, and hold certain pieces of legislation hostage.” Armstrong spent six years on a presidential cancer panel, and says “the abuse of tobacco is the number one reason that we have cancer in this country. And it has to be stopped. Armstrong's own Lance Armstrong Foundation is dedicated to combating cancer, and he traveled to Wisconsin at the invitation of Governor Jim Doyle. Armstrong, whose home town of Austin, Texas is smoke free, says bans are not job killers, and second hand smoke is a proven killer.