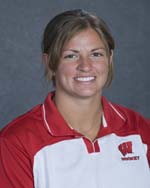 With the win, the two-time defending national champion Badgers advance to Saturday's NCAA Championship game against the winner of Thursday's second semifinal between Minnesota Duluth and New Hampshire.

Harvard scored the first goal in the opening period, but the Badgers (29-8-3) responded with three goals in a seven-minute span early in the second and added the final goal early in the third period.

With her pair of goals, Zaugg improved her school record career goal total to 89 and moved within three points of third place on Wisconsin's career points list with 156.

Faceoff time for Saturday's Frozen Four Championship game is 12:30pm on Saturday at the DECC.