You are here: Home / News / Badgers getting ready for NCAA opener 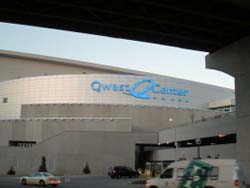 The Wisconsin Badger men's basketball team arrived in Omaha, Nebraska on Tuesday, and will start preparing for Thursday night's NCAA opening round game against Cal State Fullerton at the Quest Center (pictured).

Thursday's game will feature a contrast in styles.  The Badgers play the slowdown game and rank #1 in the nation in defense, allowing around 53-points a game.  Meanwhile, the Titans are a high flying act.  They average nearly 87 points and game, which ranks 6th in the country.

Cal State Fullerton hasn't been to the dance since 1978, 30 years ago.  That year, they were one win shy of a trip to the Final Four, having lost by one-point to an Arkansas team led by former Buck Sidney Moncrief.

Cal State Fullerton is known mostly for its great baseball teams, but fans are excited about the basketball team now.  CSF is 24-8 and comes in seeded 14th.  They come in with six straight wins under their belts.

The Badgers have won 10-straight and are the champions of both the Big Ten regular season and Big Ten tournament titles.

Listen / download – Jon Arias reports on the Badgers in Omaha. :42