You are here: Home / Badgers / Badgers headed back to Frozen Four 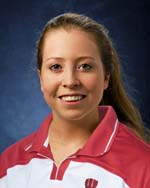 The Wisconsin Badger women's hockey team got all of their scoring from freshman, including the game winning goal 1:29 into overtime by Mallory Deluce (pictured), as the Badgers outlasted the Minnesota Gophers 3-2 in the NCAA quarterfinals.

Kelly Nash and Hilary Knight each scored in regulation as the two-time defending NCAA champion Badgers (28-8-3) advanced to the Frozen Four, held March 20 and 22 in Duluth, Minnesota for the third straight season.

Just as in the previous two runs to the national title, the Badgers needed overtime to reach the Frozen Four.  Junior goalie Jessie Vetter made 21 saves, all in regulation, to imporve her career NCAA record to 7-0-0.

Wisconsin will face No. 1-seed Harvard in the first semifinal of the Frozen Four on March 20 at the DECC.  The game will be a rematch of the four-overtime NCAA quarterfinal from last season, when 5,125 fans at the Kohl Center saw Zaugg send the Badgers past the Crimson 1-0.