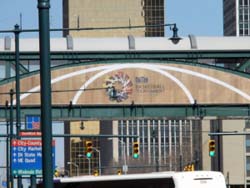 The Wisconsin Badgers rallied from 12 points down in the second half and squeaked out a 65-63 win over Michigan State in the Big Ten Tournament semifinals at Conseco Fieldhouse in Indianapolis.

The Badgers (28-4) will face the winner of the Illinois-Minnesota game in tomorrow's 2:30pm championship.

Senior forward Brian Butch had 19 points and Marcus Landry added 18 for the Badgers.

The Spartans were led by senior guard Drew Neitzel with 26 points.  Neitzel had 28 in their quarterfinal win over Ohio State the day before.

The Badgers did lose their point guard, Trevon Hughes with an ankle injury with about 12-minutes left.  It's not known how serious his injury is, but based on the fact that he could put no weight on it at all coming off the court, it would be a stretch to think he could play in tomorrow's championship game.

The Spartans had a last shot, but Neitzel's three pointer was off.  The Badgers could have iced it just before that, but guard Jason Bohannon, who shoots nearly 90% at the free throw line, missed both attempts to give the Spartans the chance for the win.