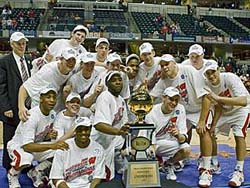 The Wisconsin men's basketball team received a No. 3 seed in the Midwest Region and will face 14th-seeded Cal-State Fullerton in the first round of the 2008 NCAA tournament on Thursday in Omaha, Nebraska.  The Badgers are making their 10th straight appearance in the Big Dance.

The No. 3 seed is the second-highest in school history, trailing only last year's No. 2 seed.  The Badgers are 29-4 on the season and won both the Big Ten regular-season and tournament titles.

The winner of UW's first-round game will meet the winner of the game between No. 6 USC and No. 11 Kansas State on Saturday.

Listen / Download – Bo Ryan on getting a 3-seed in NCAA Tournament. :21