You are here: Home / News / Bill Scott's key's to a Badger victory 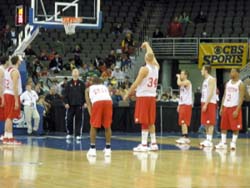 The Wisconsin Badgers spent the day Wednesday, getting used to their weekend surroundings.  They're hoping to pull two wins out of the Quest Center and advance to the Sweet 16 next week.

Wisconsin wants badly to atone for their 2nd round dismissal from the tournament last year.  They went in having to make up for the loss of Brian Butch, who suffered an elbow injury that ended his season.  This time, Butch is back and the rest of the team appears to be reletively healthy.

Key's to the game.

1.  Shoot a good percentage – It's always harder for the opposition to run if
they're pulling the ball out of the net all the time.

2.  When not making shots, pound the boards – The Titans want to run, but it's
more difficult to do that if they can't get rebounds.

3.  Defend the three – CSF shoots it just over 38% from 3-point range, but they
also get several more three point shots off compared to their opponents.  If
they take a lot of 3's and shoot a decent percentage, look out.

4.  Turnovers – If the Badgers are sloppy with the ball, that plays right into the
Titans hands.  Getting shots as opposed to losing possessions, well need I
say more?

5.  Michael Flowers vs. Josh Akognon – Cal State Fullerton is pretty balanced,
but Akognon is their top weapon.  If Flowers can do to Akognon what he's
done to so many other offensive stars, the Badgers stand a good chance to
advance.

6. A big day from Marcus Landry – I like the matchup's with Landry taking the
ball to the rack against a much smaller team.  If Landry stays out of foul trouble,
the Big Ten Tournament's M.O.P. (Most Outstanding Player) could have a big
game.

Tipoff time is 8:40pm at the Quest Arena in Omaha, Nebraska.  The Titans last appeared in the NCAA Tournament in 1978, making it to the Elite 8.  The Badgers carry a 10-game win streak into this game and are in the NCAA's for the 10th straight year.