You are here: Home / Politics / Govt / Doyle: Assembly budget fix is a scam 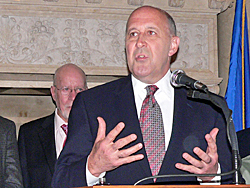 Governor Jim Doyle says it's a scam, and he's frustrated.

He's talking about the budget repair bill just passed by the Republican-controlled state Assembly, which was very different from the plan the governor prepared. Missing was the hospital tax and a raid on the transportation fund to help fix the $652-million budget shortfall.

Doyle calls it fiscally irresponsible, saying there was no help for kids with autism, no statewide smoking ban and no Great Lakes Compact.

Doyle is hopeful the Senate will pass a responsible bill, and then the two Houses could work together on a sensible agreement.