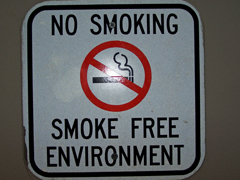 Eau Claire is the newest front in Wisconsin's smoking ban battle. A big crowd is expected for a public hearing tonight, on a ban similar to those in Madison and Appleton. Bonnie Harper is president of the Eau Claire City-County Tavern League, and says her members are not happy with ban advocates on the city council: “they have their minds made up, that they're going to do this, regardless of what we can show them has happened to other communities that have suffered these bans.”

Harper expects at least some bars in Eau Claire will go out of business, as smokers head to neighboring municipalities. But City Council member Dave Duax says bars can add clientele. “They're afraid of losing that smoking clientele,” says Duax. “They have not looked at opportunities that might be there, by people who've been denied the opportunity to come into their bar because they are smoking.” The city council has scheduled a vote for Tuesday. If it passes, the ordinance would go into effect on July First.