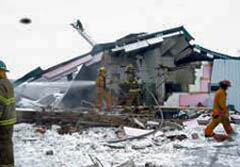 Two men were injured in an explosion Tuesday morning at the Cortec Spray Technology Division Building in Spooner. Police say the explosion at the Cortec Chemical plant happened around 8:35 am. The two men injured are Corey LaBonte and Aaron Merchant. Both were taken to the hospital emergency room and were treated for burns and other injuries. Their conditions are not known, though officials say one of the injured is in a much more serious state than the other.

Chief Operating Officer Anna Vignetti says the workers were setting up for a production run when the blast happened. She says seven employees were at the plant at the time of the explosion. Nobody else was injured. Cherrie Luell of WK Appliances in Spooner was across the street in her store when the explosion occurred. She says the building shook and she could hear intermittent explosions, "like cans popping" for about 30 minutes after the initial explosion occurred.

The plant manufactures aerosols and paint solvents and is located just south of Spooner on highway 63. Traffic was detoured around the explosion site. At least 20 people and several nearby businesses were evacuated from the area. The exact cause of the explosion remains under investigation.