You are here: Home / Politics / Govt / Lance wasn't there 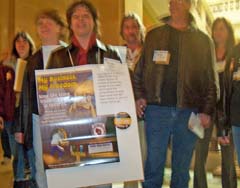 Tavern Leaguers lobby lawmakers in Madison, converging on the Capitol from all over the state. Bar owners like Gary Jacobson of Necedah say whether or not folks smoke in Wisconsin taverns ought to be up to the owners.

"I have no problem with someone else if they want to smoke or not smoke," said Jacobson. "I do have a problem with someone telling me what I can and cannot do with my business." Jacobson estimates that 90% of his patrons are smokers. Reza Tabrizi, owner of Reza's Lakeside in Friendship says it's a freedom of choice issue, and a smoking ban will cost him customers: "if you don't like to smoke, you don't come to my bar. If you want to smoke, you're more than welcome." And Tim McKeown of Stevens Point worries about the effect a smoking ban will have on his business — and his family. "This is a free country. People should be able to do what they want, with their own businesses," said McKeown. "I have a family to provide for. This could take a huge chunk out of our business." McKeown noted that there are smoke free bars in Portage County, for people who want that.

The Tavern League lobby day came a day after an Assembly committee passed a version of the smoking ban, and supporters rallied in Madison with Governor Jim Doyle and cancer survivor Lance Armstrong .