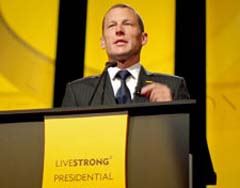 Governor Jim Doyle has enlisted the aid of a sports superstar in the battle over a statewide smoking ban . Lance Armstrong will be in Wisconsin next week to lend his support. The cancer survivor says the disease is devastating, but he's not trying to take away anyone's livelihood. If people want to smoke in their own living rooms, that's their right. "But when you step into a room with ten other people that are nonsmokers, I think that's when your right stops," Armstrong said during a conference call with Doyle. "By you exercising your personal freedom, you have put their lives potentially at risk by secondhand smoke."

Armstrong compares public smoking to speeding in a car without regard for the safety of others, and maintains there's no longer any legitimate debate on the danger: "every researcher will tell you that secondhand smoke kills. Period."

Armstrong, whose Lance Armstrong Foundation is dedicated to combating cancer, said he was happy to accept Governor Doyle's invitation to come to Wisconsin in support of a workplace smoking ban. A ban has passed in several states, though not in Armstrong's home state of Texas. Armstrong will be in Madison and Milwaukee on Tuesday.