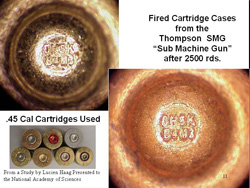 An expert on microstamping talks to state lawmakers about another tool that can help law enforcement.

Josh Horwitz , Executive Director of the Coalition to Stop Gun Violence, Washington DC, is an advocate of requiring gun manufacturers to include the new "microstamping" technology in all new semiautomatic pistol models sold in the state.

"Well it's an evolution in ballistic technology, and what it actually does is it take a serial number from the firearm and transfers it to the expended cartridge of a fired pistol."

Appearing at the state capitol, Horwitz tells Wisconsin Radio Network, lasers are used to make precise and microscopic engravings on internal mechanisms of a gun. When the gun is fired, information identifying the make, model and serial number of the gun is intentionally stamped onto the cartridge.

"It actually starts on the … from the firing pin and the breech face and it transfers to the back of the cartridge, and the cartridge gets expended from the pistol, often times ends up on the ground, and now you have the serial number from the gun that fired it."

"Again this is one tool that we'd like to provide for law-enforcement. It's not the panacea for all crime but it's an important tool I think will really have an impact on street crime."

California Governor Arnold Schwarzenegger in October signed the first microstamping law , that will take effect for new firearms starting in 2010. About eight states after California have introduced bills or are in the process of it. Wisconsin is still in the introductory stage.