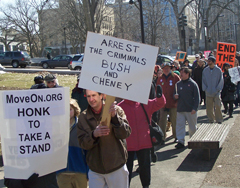 About 150 antiwar protesters paraded around the Capitol Square in Madison during the noon hour Wednesday, marking the five year anniversary of the start of the Iraq war. The conflict has claimed the lives of 85 Wisconsin natives, and the Madison Area Peace Coalition says a further 550 Wisconsin service members have been wounded in the war. Other protests were planned for communities across the state, including Green Bay, Wisconsin Rapids and La Crosse.