You are here: Home / Politics / Govt / Rallying for Tibet 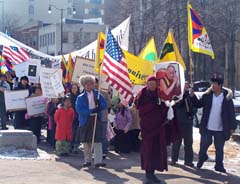 A Capitol rally remembers a struggle for human rights and freedom. On March 10, 1959, the people of Tibet rose in protest against the communist Chinese invasion. Jampa, vice-president of the Wisconsin Tibeten Association , says millions of ethnic Chinese have settled in his homeland in the years since, and Tibetans have become a minority in their own land. He says about 500 Tibetans and Tibeten-Americans now live in the Madison area.

Representative Joe Parisi is a Madison Democrat and author of legislation marking March 10 as Tibet Day in the Badger state. "The Tibetan people are keeping their message alive, through a message of hope, and a message of nonviolence," says Parisi. He and Rep. Spencer Black (D-Madison), another veteran advocate for Tibet, addressed the rally . Parisi's support for Tibet has gotten unwanted attention: last year, two officials from the Chinese consulate in Chicago showed up unannounced at his Madison office. The rally, and others like it around the world, draws attention to continued Chinese human rights abuses as Beijing prepares to host the Olympic games.