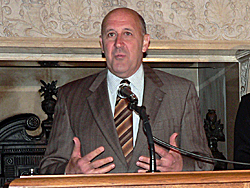 About 1,000 great minds from around the world will converge in Madison this fall.

"The University of Wisconsin has won the honor of hosting the 2008 World Stem Cell Summit."

Governor Jim Doyle says he's honored this big event will take place in Madison — the birth place of stem cell research. The governor says embryonic stem cell research holds the potential to not only save lives, but to create economic opportunity for innovation and job growth.

"And we look forward to hosting all of the great scientists, researchers, philanthropists, business people, legal experts, everybody from around the world who have been so critical in advancing stem cell research."

Other bigger cities, including Washington DC and New York, were considered, but Madison prevailed. UW scientist Dr. Jamie Thomson — a pioneer in stem cell research — will keynote a presentation on his research showing the creation of stem cells from ordinary human skin cells, and that was a contributing factor in holding the conference in our state.

The event coincides with the 10th anniversary of the breakthrough of UW-Madison's Dr. James Thomson, who became the first to successfully isolate and cultivate an embryonic stem cell line in 1998.

The World Stem Cell Summit is hosted on September 22nd and 23rd, 2008 by WiCell and the University of Wisconsin Stem Cell and Regenerative Medicine Center at the Alliant Energy Center.