You are here: Home / News / Turris signs with Phoenix Coyotes 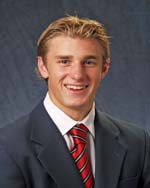 Wisconsin Badger freshman forward Kyle Turris has signed with the Phoenix Coyotes of the NHL and will pass on his final three years of men's hockey eligibility at the University of Wisconsin.

The No. 3 overall draft pick of the Phoenix Coyotes in last summer's NHL entry draft, Turris became the fourth Badger in school history to lead the team in scoring as a freshman when he posted 35 points in 36 games played (Joe Pavelski, Mike Eaves and Dennis Olmstead were the others).

Turris finished his only season with the Badgers as the UW leader with 35 points, 24 assists and one short-handed goal, while ranking 3rd on the team in goals with 11, including two game-winning tallies.

The WCHA Rookie of the Year, Turris was named All-WCHA Third Team and All-WCHA Rookie Team for his freshman season.

During the season, Turris led Team Canada to gold at the 2008 IIHF World Junior Championship, scoring a team-best eight points on four goals and four assists.

Turris also becomes the first Badger since Ryan Suter in 2004 to leave after just one season wearing the Cardinal and White, and is the sixth early departure during the Mike Eaves coaching era.

Turris is expected to be in the Phoenix lineup for the Coyotes' final three games of the season beginning Thursday at home against Dallas.  The Coyotes were eliminated from playoff contention Sunday night.  The Coyotes are coached by Wayne Gretzky, the NHL's all-time leading scorer.