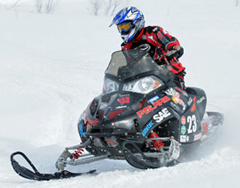 Call it an  electrifying win for UW Madison. Last week at Michigan Tech, team Bucky ran away from the competition in a face off of electric sleds, at the Clean Snowmobile Challenge . “We'd watched for two years while other teams had tried to make electric sleds, and we just concluded that they weren't doing a very good job,” said faculty advisor Glenn Bower.

The UW had something of a secret weapon under the hood: an electric motor originally developed for the General Motors EV1 , an electric car produced in limited numbers in the late 1990s. “We have the equivalent of 100 horsepower right now,” said Bower, adding that modifications should yield close to 150 horsepower by next year, which ought to be good for a top speed of around 90 mph. In the meantime, the National Science Foundation will be testing the sled in Greenland this summer, and a member of the UW team will get to go along.