You are here: Home / News / Wolf puts things in perspective 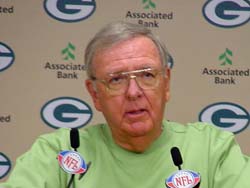 Wolf of course is responsible for Favre coming to Green Bay.  Wolf sent a first round draft pick to Atlanta for Favre and there's no question who got the better end of that deal.

When asked how he thought Aaron Rodgers would do stepping in for Favre, Wolf said he hadn't seen enough of Rodgers to say, but he said the Packers should be greatful they have somebody of Rodgers caliber to step in after Favre's retirement.

Wolf has always been known to speak his mind.  He invited those gathered at a press conference this past weekend to look at many of the other starting quarterbacks around the league.  In effect, he said they were a joke, as teams continued to raise ticket prices.

He said Packers fans should consider themselves fortunate.  They've had the chance to watch one of the greatest players of all time and for 16 years.

Think about what Wolf said.  We don't know how good Rodgers is going to be.  But nobody expects him to be around for 16 years like Favre was.  In fact, if Green Bay got half of that from Rodgers, they could consider themselves fortunate.