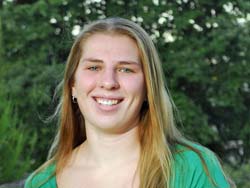 Wisconsin's Jolene Anderson became the first Badger women's basketball player in six years to be drafted when she was picked 23rd overall in the second round of the WNBA Draft by the Connecticut Sun.  Anderson is just the third Badger ever to be drafted into the WNBA and follows in the footsteps of former UW players Tamara Moore and Jessie Stomski who were both picked in 2002.

Anderson led UW all four years in scoring and rebounding and scored in double figures in 118 of her 123 career games.  She started in every game as a Badger (123 straight games) and is the only UW player to rank among the top 10 in four major career categories: 1st in points with 2,312; 6th in rebounds with 848; 4th in assists with 409 and 6th in steals with 242.

Anderson will participate in the WNBA preseason training camp starting April 29.  The WNBA begins its 12th season in early May.