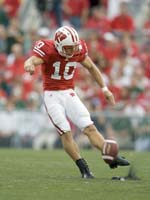 Former  Badger and All-American placekicker, Taylor Mehlhaff  (pictured) is the first kicker to go in the NFL Draft.  Mehlhaff was taken 178th overall, the 12th pick in the sixth round  by the New Orleans Saints.

Mehlhaff is the second specialist overall to be drafted, behind punter Durant Brooks from Georgia Tech, selected by the Washington Redskins at No. 168.

Mehlhaff  became the second Badger to be selected in this draft after Jack Ikegwuonu was selected in the fourth round by the Eagles.