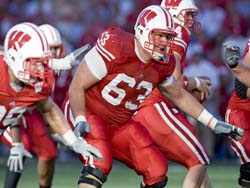 The Outland Trophy has been awarded to the best interior lineman in college football since 1946.

The Hudson, Wis. native was a consensus second-team All-Big Ten selection last season and has started 39 straight games over the last three seasons.  Former Wisconsin All-American, Joe Thomas, received the award after the 2006 season and is the only Badger to have won the award.

The Outland Trophy is named after the late John Outland, a lineman at Pennsylvania at the turn of the century.