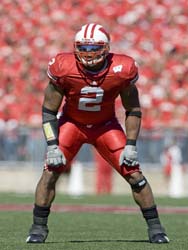 Wisconsin senior linebacker, Jonathan Casillas, has been named to the 2008 Lott Trophy Watch List for the second straight season.  Casillas is one of 42 defensive players throughout the country to be named to this years preseason watch list.

The Lott Trophy is named after Hall of Fame defensive back Ronnie Lott and is awarded annually to the nation's Defensive IMPACT Player of the Year.  The award is given to a player who exhibitions the same characteristics Lott embodied during his distinguished career; Integrity, Maturity, Performance, Academics, Community and Tenacity.

Cassillas is one of seven repeat nominees up for this year's award.