You are here: Home / News / Crean gets 8-year deal in Bloomington 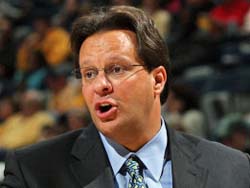 Indiana made it official today, announcing the hiring of former Marquette coach Tom Crean as its new head coach.  Crean replaces Kelvin Sampson, who resigned before last season ended due to allegations of NCAA recruiting violations.

It'll be up to Crean to try to restore the reputation of a team that ran a tight ship under former coaching legend Bob Knight, then has changed coaches three times since Knight's firing.

Crean gets an 8-year deal, reportedly worth more than $2-million a year.

Crean said today that he and his team will meet the challenge of restoring the program head on.  He said he wants his players to embrace the history of Indiana Basketball and said he's excited to be coaching against his former mentor at Michigan State, Tom Izzo.

Marquette now begins it's search for Crean's replacement.  Xavier coach Ryan Miller is said to be a front runner for the job.