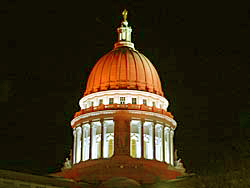 As Wisconsin enters the peak road construction season, the message is clear: Slow down, move over and pay attention!

The consequences for injuring or killing someone in a work zone go beyond fines and jail time. Wisconsin Department of Transportation Secretary Frank Busalacchi ( pronounce ) says it extends to the lifelong emotional toll suffered by family and friends of victims.

"As difficult as it may be to understand, each year in Wisconsin nearly 2,000 crashes occur in work zones. Those crashes on average injure 1100 people and kill about a dozen people."

The DOT is running new work zone safety TV commercials to help educate the driving public. Busalacchi stresses the importance of Wisconsin's Move-Over law , which requires motorists to slow down or move over to another lane if possible when they see maintenance, utility or emergency vehicles ahead.

"It's a good law … but we need more people to be aware of it and to obey it."

At a ceremony at the state capitol Tuesday, Busalacchi recognizes those who have been killed and injured in work zone crashes, and he talks about the consequences of speeding and inattentive or impatient driving.

"Yes, fines are double in work zones when workers are present, but that's little solace for family and friends of those killed in work zone crashes. They've paid the price beyond all reason."